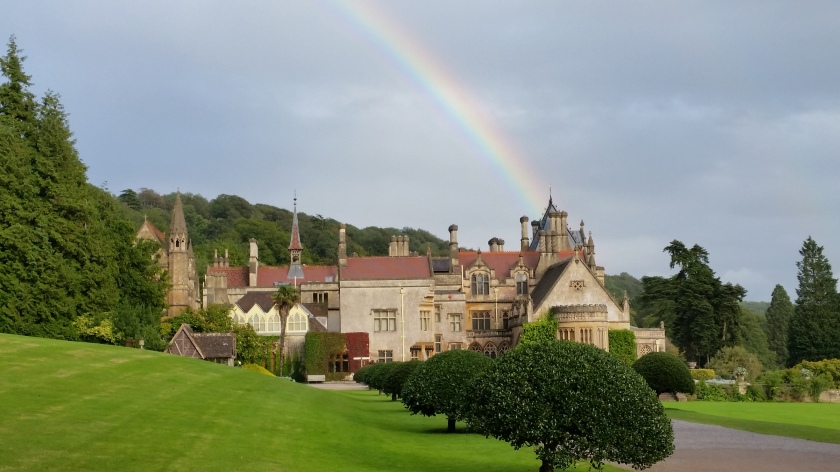 When we build, let us think that we build forever

This Victorian Gothic Revival house is Grade I listed and situated near Wraxall, North Somerset. At the heart of this picturesque building is a Georgian house which over the course of several years was transformed and emerged as something befitting a family of the richest commoner in England. 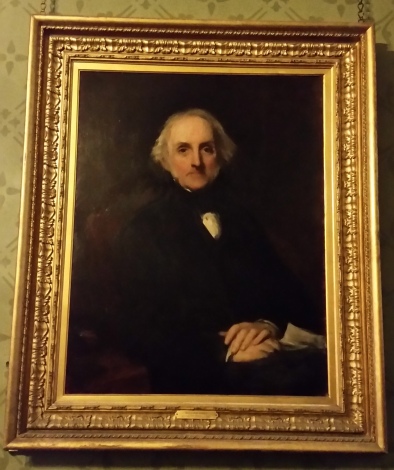 William Gibbs convinced British farmers of the merits of using the nitrate rich guano as a fertiliser. This was achieved with his pamphlet published in 1843 after he had brought the first shipment to Britain from South America. This risky business venture was a success and made him incredibly rich. It was these proceeds which allowed him to purchase Tynes Place, finance its alterations as well as acquiring surrounding land. The property became his country home because of its proximity to Bristol for easy access to London. He retained a London home and carried on conducting his business from the capital.

When Gibbs married Matilda Blanche Crawley-Boevey (known as Blanche), he joined a family who were ardent followers of the Oxford Movement (Tractarian Movement), this was to play an important part in their lives. This influence was evident in the remodelling of their country home and their philanthropic work. They built or extended churches, educational buildings and institutions. Many of these projects they fully funded and actively participated in their design.

In 1854 Gibbs commissioned John Gregory Crace to undertake the redecoration of their London home as well as Tyntesfield House, as it was now called. Crace’s firm had a excellent reputation, Crace and his father had worked on Windsor Castle and Buckingham Palace. John Crace later worked with Pugin on the interiors of the Palace of Westminster. This Gothic style was what Gibbs wanted. The work on the interior involved cleaning, repairing, painting, wallpapering and supplying new items of furniture. Gibbs negotiated a 7% discount and paid by instalments, which were completed January 1856.

In 1860 Gibbs invited the architect John Norton to Tyntesfield this lead to a commission to enlarge the house. The builder George Plucknett of William Cubitt & Co joined the team in 1861 and the planning process took the next two years. Norton was known for his Gothic architecture, he had designed several churches and was commissioned to use his talents on large country houses. His brief was to extend the house by seemlessly joining the old with the new, the work started in 1863. 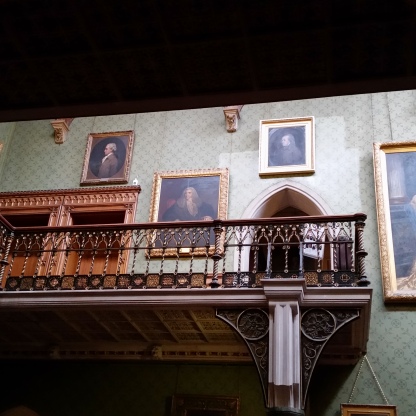 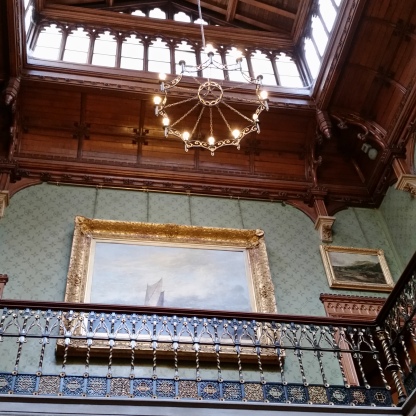 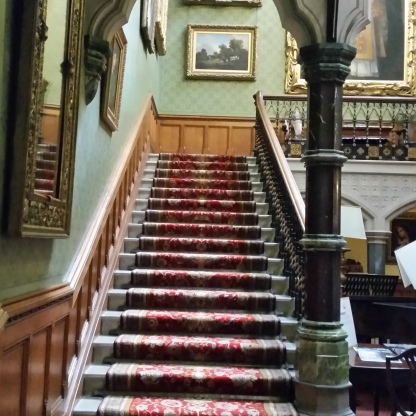 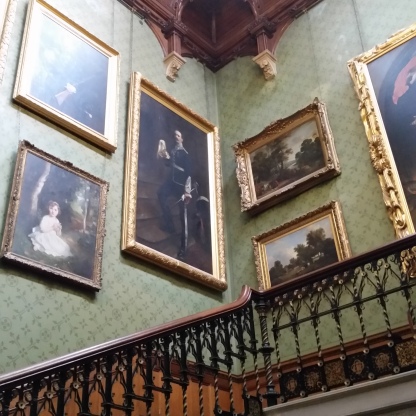 John Norton’s remodelling of the Staircase Hall produced a statement piece for the house. He insterted a glazed Gothic lantern supported with English Oak beams in the roof in order to lighten this otherwise dark space. The newel posts  are of griotte and green Irish marble, ophicalcite from County Galway. The balustrade glided wrought iron’s Gothic pattern is similar to the grille surrounding the organ pipes in the Chapel at Exeter College Oxford. Crace stencilled the walls with a geometric floral patterns in green tones. 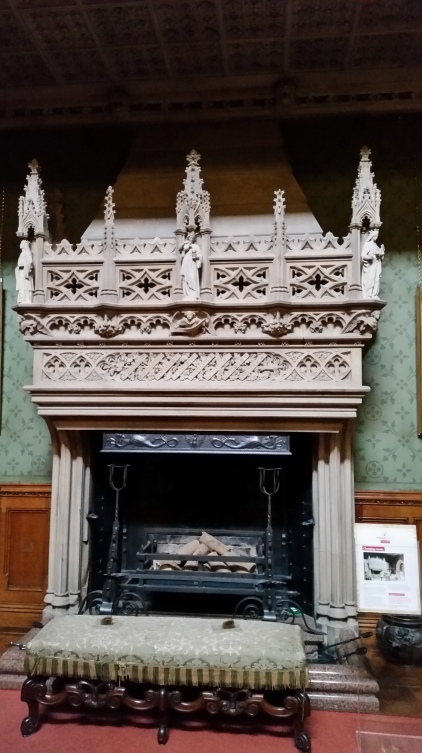 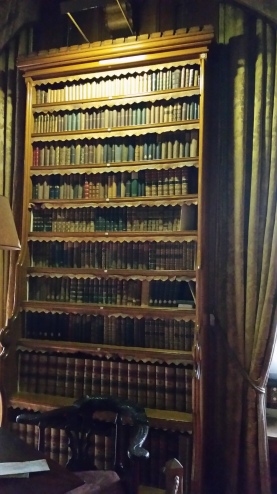 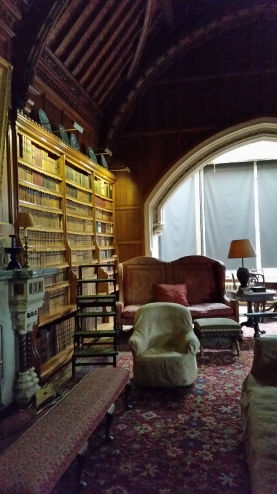 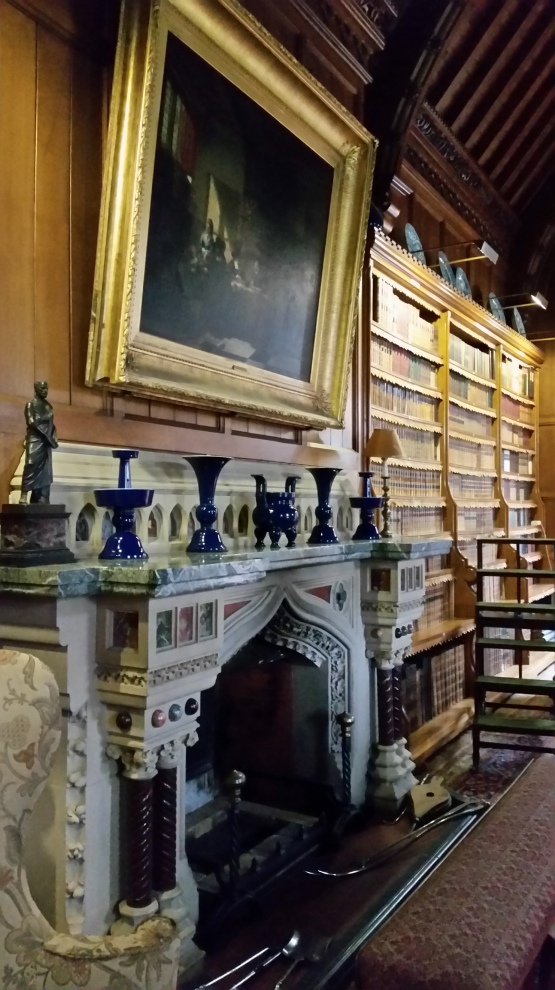 Norton’s design for the library was based Giles Gilbert Scott’s Upper Library at Exeter College Oxford. The clear glass Gothic window stones are edged with Minton tiles. Unfortunately they can not be seen in this photo as the blinds are kept drawn to protect the interior. The fireplace is of Bath Stone with native polished stones. In the centre is an ogee arch carved with leaves, and on either side are a pair of twisted dark-red Cornish Serpentine columns. 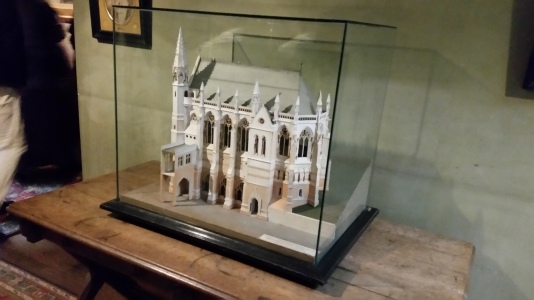 O.N. Thwaite’s model of the Chapel

At last in 1873 work began on the their own chapel designed by the eminent church architect Sir Arthur Blomfield and built by the trusted George Plucknett of William Cubitt & Co, which would hopefully insure continuity with the original extension. Unfortunately they were later replaced by G. W. Booth as builders. 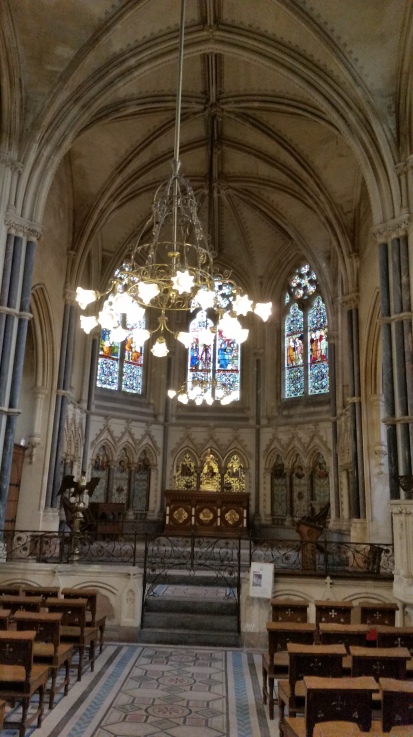 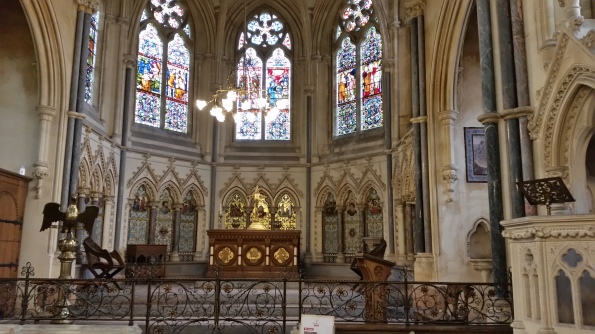 The stained glass windows were designed by Henry Ellis Wooldridge and made by James Powell & Sons of Whitefriars. They also made the marble mosaic floor of blue faience, Mexican onyx and bluejohn from Blomfield’s design. The mosaics behind the altar are by Salviati & Co of Venice depicting St Paul, St Peter, St John and St James. The brass eagle lectern, chandeliers and communion rail are by James Laver of Maidenhead.

Blomfield’s design was based on the magnificent Sainte-Chapelle in the Palais de la Cite in Paris. It was consecrated just before Gibbs died in 1875 and it was left to Blanche to complete the work in 1876-7. Sadly though the Chapel had a Crypt for the family burials it has never been used. Seen as a possible rival to the local church the Bishop of Bath and Wells withheld consecration, until William Gibbs agreed that regular parochial services would not take place and no one could be buried in the Crypt, but memorials could be hung on the walls.

Blanche carried on with the building work until her death in 1887, and then the  estate passed to their son Antony. Each generation continued to work on the house and fill the interior with furniture and beautiful works of art. As with all country houses the two world wars and death duties took their toll. Antony’s grandson George Richard, known as Richard Gibbs, 2nd Baron Wraxall, was the last family to live in the house, he did not marry or have any children. The property suffered bomb damage during the war and was turned down for a repair grant. Over the next fifty years the house deteriorated and eventually Richard was living in just three rooms until his death in 2001. Richard left the estate and money to the children of his brother and half sister, who by majority could decide whether it should be sold. The National Trust launched an appeal and raised funds to buy and secure the future of the house, kitchen garden and the park. The remaining land and properties were purchased by various organisations and individuals.