Gilbert Sheldon, The Archbishop of Canterbury commissioned Christopher Wren to create a suitably spectacular building to hold the Acts of Graduation, that were usually held in St Mary’s Church. It was William Laud who originally voiced the idea of a secular building for university ceremonies. Sheldon resurrected the idea when he succeeded to the position of Archbishop of Canterbury in 1663. Sheldon gave £1,000 to open the proceedings and construction started in 1664, taking five years to complete. He had hoped to gather sponsors for the enterprise, but unfortunately he was unsuccessful and went on to personally contribute most of the funds. It was originally built to provide a venue for public ceremonies and to house the university printing press. In 1713 Oxford University Press moved to the Clarendon Building. 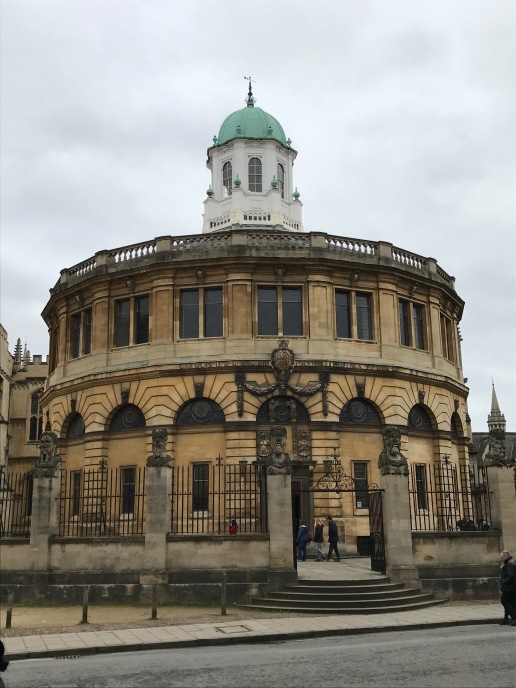 This was Wren’s second major commission; the first was the chapel at Pembroke College, Cambridge. The theatre was designed to provide the maximum internal space. The roof spanned a 21.35 metres by 24.38 metres auditorium without supporting columns. He used five oak trusses to span the roof; each truss consisted of seven interlocking timbers held together by scarf-joints, bolts and plates, and supported by three posts. The work to construct this amazing roof was undertaken by master-carpenter Richard Frogley, who was regularly employed by the university.  The original roof had oval dormer windows, which can be seen in the early engravings. These were removed in 1801 when George Saunders rebuilt the roof. Wren’s central cupola was replaced in 1838 with a much larger one designed by Edward Blore.

Thomas Robinson the master-mason who built the theatre to Wren’s design, employed his three sons and several other families. He used locally sourced limestone from Headington, Burford, and Barrington quarries. Prior to the 18th century the Headington stone was used for most of the buildings in the city. Unfortunately it did not stand the test of time and weathered badly. During the 19th century sections of the exterior were refaced with Bath Stone on the east, west and north side; Clipsham was used for the bay on the south-west corner. In the 1950s urgent external work was necessary for repairing the stonework; including rebuilding the parapet and balustrade.

The original fourteen Termains (Terminus was the Roman God of boundaries), which surround the theatre were designed by Wren and carved by William Byrd, a mason and stonecutter. They were carved in limestone from the Headington Quarry located to the east of Oxford. It is now a residential and conservation area. Not long after their completion one was removed to make way for the construction of the Clarendon Building.

The stone deteriorated and the thirteen heads were replaced in 1868, unfortunately the poor quality replacements lost their facial details. Between 1970 and 1972 sculptor Michael Black together with two assistants, carved a third set of busts from Lincolnshire Clipsham limestone.

The ceiling fresco is an early example of English illusionist decoration, and consists of thirty two oil on canvas panels painted by Robert Streater, Serjeant Painter to Charles II. Each painting is bordered by gilded cords in homage to the classical architecture of Roman. The fresco depicts Truth descending upon the Arts and Sciences and expelling Ignorance from the university. In 2004 the fresco was removed for restoration, which took four years. The frescos have been repaired or restored on three previous occasions by Tilly Kettle (1762), William Delamotte (1802), and in 1826. The villainous figure of Ignorance was obscured when the organ housing was installed in 1876.

The Vice-Chancellor’s Throne, the work of Richard Cleer

The interior woodwork and staircases were the work of Richard and Arthur Frogley. The elaborate wainscotting and woodcarving were undertaken by William and Richard Cleer in London, and transported to Oxford by barge.

The Provost’s Rostrum, the work of Richard Cleer 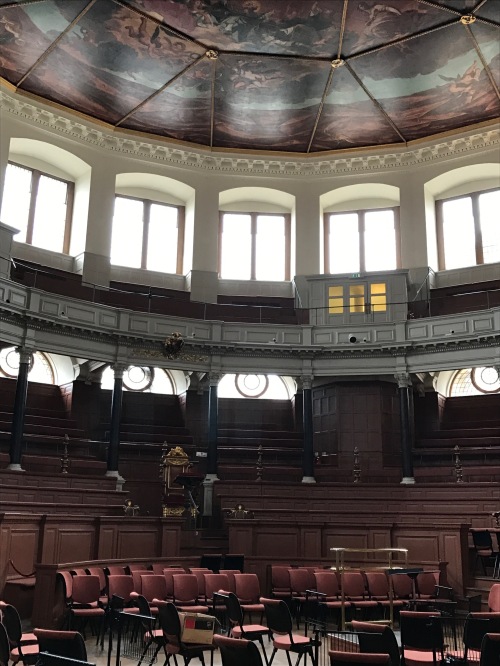 Interior set up for a concert

In the 1930s steel supports were inserted into the timber galleries around the auditorium. The first electrical power and lighting was also introduced during this period. It was later updated in the 1960s when the Georgian sash windows were replaced with oak windows similar to Wren’s original design. In 2010 the lighting was improved and the interior received a new paint scheme to restore Wren’s original design.

The Grade I listed Sheldonian Theatre is now an important venue for concerts and lectures, as well as fulfilling its original purpose as a secular building for university ceremonies.

I am a historian, writer and editor. I spend my time researching architectural history, people and places. View all posts by heritagehistorian