The present Baptistery of San Giovanni is a result of the remodelling carried out over several centuries. The original sandstone building stood on the site of an earlier Roman guard house, which was part of a defensive wall. The Baptistery was enlarged to cater for the expanding population and in line with the importance of Florence. In 1059 it was reconsecrated to San Giovanni by Pope Nicholas II who was originally the Bishop of Florence. In the 11th century baptisms took place twice a year and attracted large numbers of people. Before the construction of the Duomo Santa Maria del Fiore, the Baptistery was also the City’s cathedral. San Giovanni was used as a baptistery up until the 19th century. 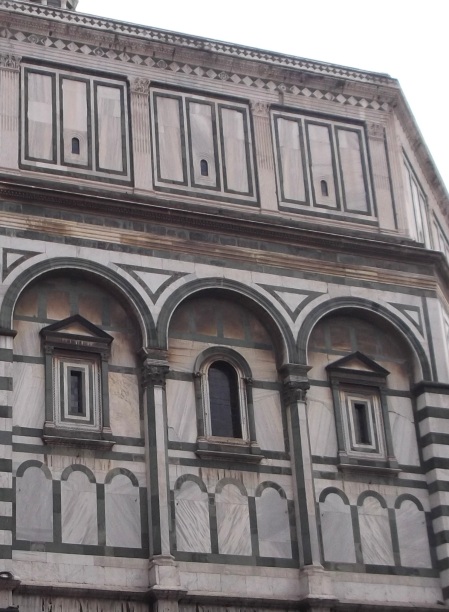 The Facade of the Battistero di San Giovanni

The structure is clad in white Carrara marble with an inlay of green serpentine marble. This green marble was excavated from the quarries near the village of Figline on the eastern slopes of Monte Piccioli in the Apennine Mountains. This marble was sort after for decorative purposes, as it ranged in colour from light green to almost black, and can contain yellow and green streaks. It is also know as Ranocchiaia Stone (frog stone).

During the 14th century a series of plagues were the catalyst for the creation of some of the most exceptional pieces of artwork. After a particularly bad outbreak in 1400, when some 12,000 Florentines lost their lives, the Wealthy Guild of Calimala (Cloth Merchants), sponsored a competition as a Votive offering for a new set of bronze doors for the north side of the Baptistery. The competition required each candidate to produce a trial panel of approximately 43 cm X 33 cm from four sheets of bronze weighing 34 kilograms. The panel had to depict Abraham’s sacrifice of Isaac, using Genesis chapter 22 verses 2 – 13 as reference.

The candidates had a year to complete the very skilled process of producing the panel. The first stages were lengthy and involved modelling the figures in clay and wax, over laid in various concoctions of iron filings, cow dung and burnt ox-horn. Further layers of clay were applied, then bound with iron hoops and baked in order to create a mould. The melted wax left a space for the molten bronze to be poured. Once cooled the mould could be broken open leaving the bronze shape to be finished by removing any excess pieces and then polished.

The prestigious competition attracted seven entrants including two Florentines who had fled the city due to the plague. The returning exile Filippo Brunelleschi was unsuccessful purely due to economic factors. The other exile and winner Lorenzo Ghiberti’s design could be produced in a single casting, whereas Brunelleschi needed four separate sections and was seven kilos heavier. Brunelleschi had travelled to Pistoia as a qualified master goldsmith to work on the alter of the cathedral. The chance of fame and fortune had been too much of a draw, loosing the competition and being asked to help Ghiberti produce his winning doors seemed like an insult.

Ghiberti, unlike Brunelleschi was not a member of the guilds of goldsmiths or sculptors. He had worked in the goldsmith workshop of his stepfather. He had fled to Rimini during the plague to paint murals, and it was his stepfather who had called him back to enter the competition. During the year Ghiberti sort advice  and even made changes to his design, if opinions were unfavourable. Whereas Brunelleschi was single minded and worked in secret. 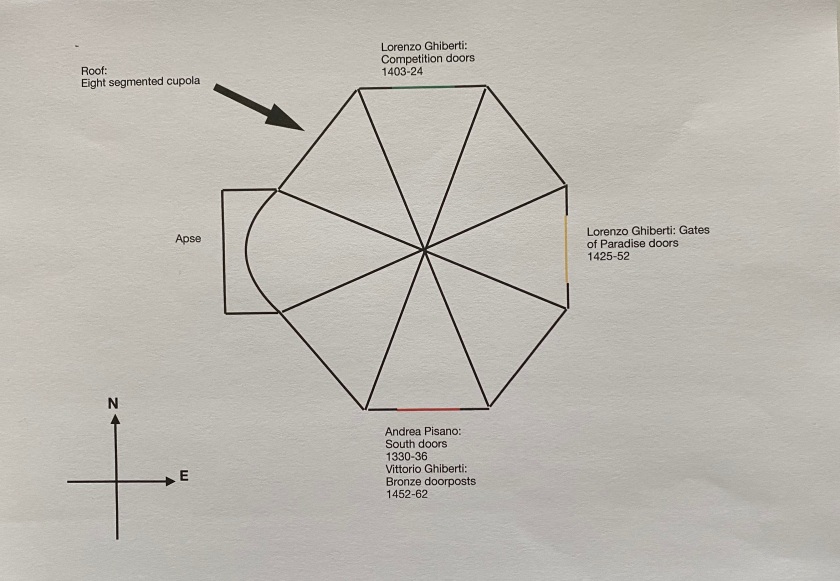 Plan of Baptistery and Position of Doors

The doors took twenty one years to complete from 1403 to 1424. They portrayed the life of Jesus in twenty panels, and the final eight depict the Evangelists and the Church Fathers. In 1425 Ghiberti was commissioned to produce the south side doors, which took twenty seven years and are known as the Gates of Paradise. The doors contain ten large square panels depicting scenes from the Old Testament. Ghiberti was given free rein with regard to the design, his new doors contain much larger relief panels minus the quatrefoils of the previous doors. This allows a larger area to show off his exceptional designs. The completed doors are a testament to the time Ghiberti took to reproduce landscapes, architecture and people as they would appear in reality, perfect perspective. The title Gates of Paradise was a result of Michelangelo’s comment that the quality of the workmanship could adorn the doors of Paradise. 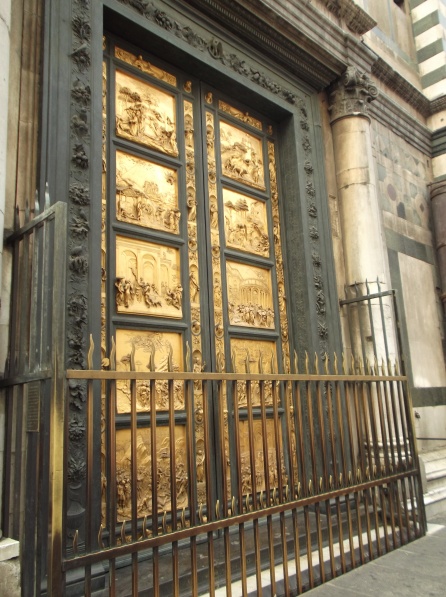 The Gates of Paradise with Key to Panels

The Commissioners decided that the doors were so beautiful they should be installed in the prime location on the east side opposite the facade of the Cathedral. Therefore Andrea Pisano’s original doors created in the early 1330s consisting of twenty panels portraying the life John the Baptist, Florence’s patron saint, and the remaining eight panels depicting the virtues, were moved to the south side in 1452. When Pisano’s doors were moved to the south side Lorenzo Ghiberti’s son Vittorio, made the bronze doorposts for them.

The original Gates of Paradise door panels are no longer on display and were replaced with copies to preserve them from weathering; the originals are now in the Cathedral Museum.

The photos and artwork are from the author’s own collection.

I am a historian, writer and editor. I spend my time researching architectural history, people and places. View all posts by heritagehistorian

This is a text widget. The Text Widget allows you to add text or HTML to your sidebar. You can use a text widget to display text, links, images, HTML, or a combination of these. Edit them in the Widget section of the Customizer.
Loading Comments...
%d bloggers like this: