The beautiful grade 1 listed Bath Abbey Church of St Peter and St Paul is the last great cathedral to be built in Britain, on the site of two previous religious buildings. The first was an Anglo-Saxon monastery and convent, which also included an Abbey Church. Towards the end of the 11th century the bishopric was moved from Wells to Bath, and plans were put in place to enlarge the monastery. The Abbey Church was replaced with a large Cathedral that had been consecrated by the 1160s. This Cathedral was vast, and evidence of its size and location can be found under the present Abbey’s floor and the surrounding pavement area.

During the 13th century the bishopric had transferred back to Wells, and the monks were reliant on the wool trade to maintain this extensive complex of buildings. The monks became idle and disobedient, neglect of the buildings allowed them to fall into a state of ruin. In 1495 Oliver King became the new Bishop of Bath and Wells. Four years later he visited Bath and had a dream of a ladder with angels ascending and descending, and at the foot was an olive tree supporting a crown. He also heard a voice say ‘Let an olive establish the crown and a king restore the church’. He believed this was a sign to rebuild the Abbey. He had the dilapidated Cathedral torn down and building work started on the Abbey. The work was undertaken by the royal stonemasons Robert and William Vertue. When the walls were almost erected it was decided to vault the choir ceiling. Unfortunately Bishop King died in 1503 and was buried in Wells as his Abbey was unfinished. 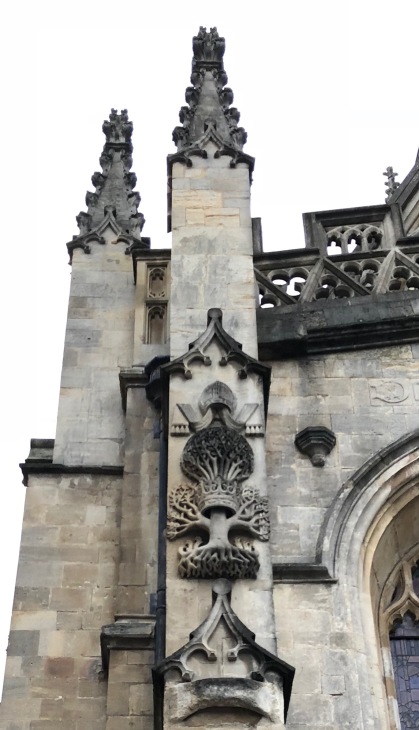 Rebus on the West Front

It was popular in the Middle Ages to use a Rebus to depict a person’s name in picture form. On the West front of the Abbey can be seen the Rebus for Bishop Oliver king. A mitre surmounting an Olive tree circled by a crown.

After the Dissolution of the Monasteries the Abbey remained unfinished. Later when Bath’s fortunes were changing and it was a fashionable spa town, it needed a large church to administer to the increased number of visitors. Queen Elizabeth I visited in 1574 and granted permission for a national collection to raise funds for its completion. 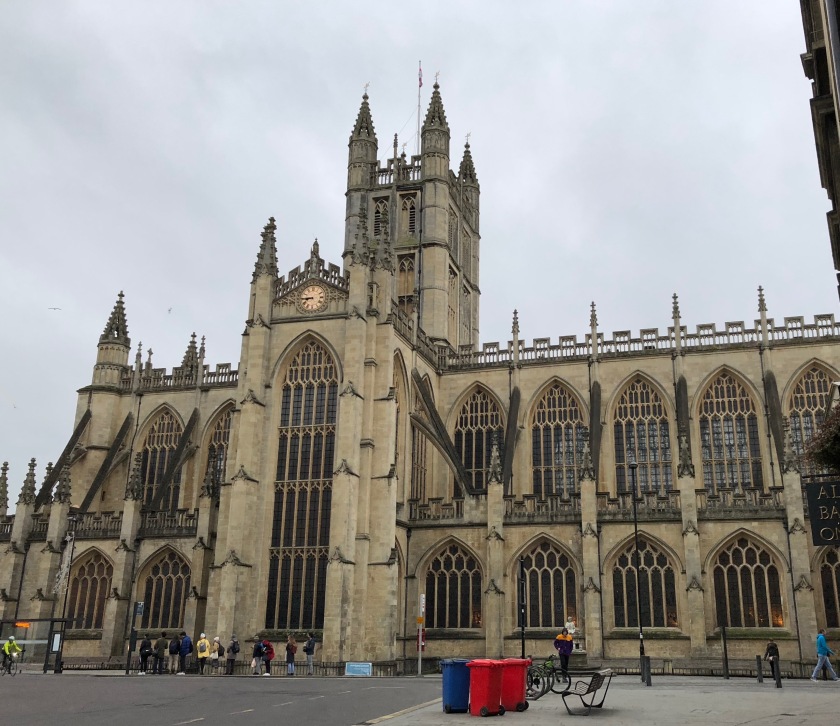 North side of the Abbey

The Cruciform Abbey was built of Bath Limestone ashlar, although Clipsham Stone was used to repair parts of the building in about 1900.

When James Montague the new Bishop of Bath and Wells was appointed in 1608, he provided £1000 for workman and lead from the Mendip mines for the nave roof. Local benefactors provided the timber for the roof and glazing for the windows. It was his brother Sir Henry Montague who presented the beautiful carved oak west doors in 1617. James Montague was now the Bishop of Winchester and when he died in 1618 he was buried in Bath Abbey according to his wishes. 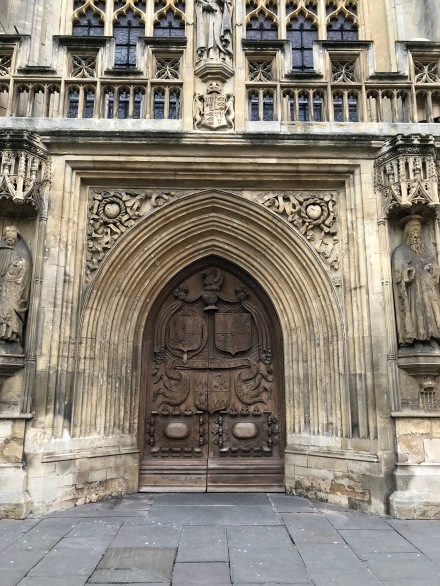 The next important phase in the Abbey’s life was the ten year restoration work, which started in 1864. The Rector, Reverend Charles Kemble appointed the architect Sir George Gilbert Scott to undertake the work and complete the Vertue brothers’ fan vaulting. 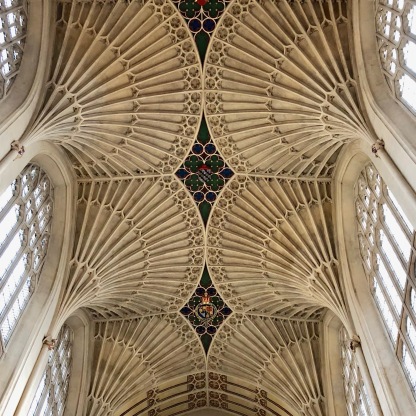 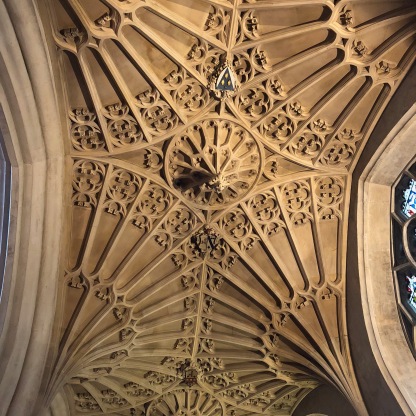 On the left the Chancel Roof’s Magnificent Fan Vaulting the Work of the Vertue Brothers, on the right Sir George Gilbert Scott’s Version

During Scott’s restoration work he relocated the 617 memorials, which were attached to the nave pillars, they are now fixed to the main walls. Not all of the people immortalised on the memorials are actually buried in the Abbey. He also installed central heating, which required removing the ledger stones from the floor, many of these stones were badly worn from the years of human traffic. When they were replaced, they were not necessary in their original location and some were cut to fit.

The Wall Memorials Commemorating the Ordinary and the  Extraordinary

During the Baedeker Raids of April 1942 the East window was blown out, the stained glass was collected and stored until after the war. The restoration work took ten years undertaken by father and son, Harry and Ron Kirk. They were employed by the London firm of Clayton and Bell, Michael Farrar-Bell’s great grandfather originally worked on the window during Scott’s restoration.

The Tower Tours allows visitors to go behind the scenes of the Abbey, and experience the best views of Bath. 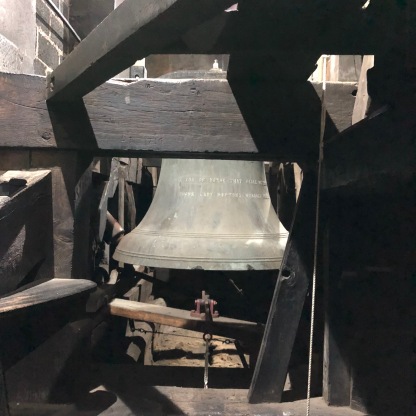 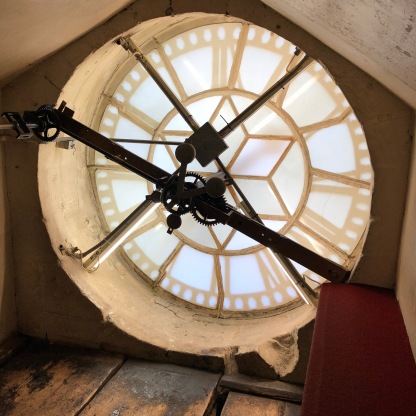 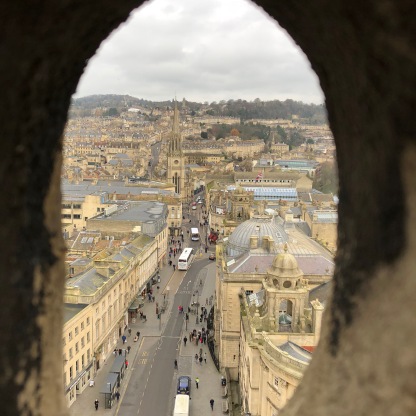 The Tenor Bell, Behind the Clock Face, Oldest Graffiti and the Beautiful City of Bath

Bath Abbey will always be connected to us as a family. My daughter and I both had our graduation ceremonies at the Abbey. My son works as a Tower Tour Guide.